The Grizzlies were good, once

And not too long ago, either. It may seem hard to believe today, but the Memphis team once featured actual good players and won more than half of their games. In 03-04, everybody on the team upped their production by about 50%, and James Posey came to the team, playing the most productive basketball of his career, by far. It’s always interesting to me to find players who are colored gray, indicating that their playing style is very close to the league average–that is, their propensity to score, play perimeter ball, and do interior things is very much in line with some theoretical “average player”–Battier in 02, Posey in 04, and Miller in 06 played in this vein and found success in the role. Also of note is the contrast between a player like Rudy Gay, who in 2007-08 was about as scoring-oriented a player as you will find, and one like the slate-blue versions of Battier and even Gasol, whose color pegs them as essentially opposite to a scoring-oriented player like Gay. Rudy may be good, and have lots of potential (quality younger players often start out with a focus on shooting), but I always have had a soft spot for those scorer’s-opposite types like Battier. 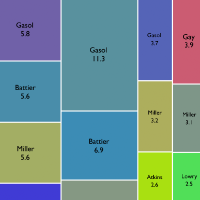 What do you think? Was Posey the catalyst for the Grizzlies’ success? Did Battier’s and Jones’ departure spell the end? Does the order of the players within each season appear right? Is Abdur-Rahim one of the best players in Vancouver/Memphis history? Please let me know your expert opinions in the comments.

This entry was posted in basketball, graphics, nba, sports, statistics. Bookmark the permalink.